Some words on a word: Brainstorm

Brainstorm is one of those words that often seems to be misunderstood or used incorrectly. I’m not talking about the ‘controversy’ that Brainstorming attracted during the mid-2000s, when it was deemed offensive to people suffering from epilepsy.

Although now I mention it, I will say that I can’t get onboard with the rebranding of Brainstorm to ‘Thought Shower’. We try to be inclusive and considerate in our approach to work but the term Thought Shower is just too ambiguous.

No. I mean that the term Brainstorming is too often used to say, “Let’s all compete to shout out the best idea. Then I can take credit for it.”

A few people then start to engage in a performance of one-upmanship and crafty put-downs, whilst the rest of the group are left to sit and watch. Occasionally, one or two people in the wider group may think of the ideal solution but will be unable to get a word in to share it. The idea is lost under a cloud of frustration and resentment.

This behaviour, more often than not, comes from not fully understanding the principles of Brainstorming. We share the technique through a process of osmosis. Handing it down through the organisation with plenty of ‘show’ but not much ‘tell’; by taking part in a Brainstorming session we believe that we can now lead one. But we haven’t been told about the four principles of a successful Brainstorm.

It was Alex Osborn who first introduced the term Brainstorm (or Think Up as he originally called it) in relation to creative thinking. He advocated the four principles, or rules, of Brainstorming. He also suggested that a pure Brainstorming session should focus only on coming up with ideas. A second event should follow, to sort and evaluate the ideas generated.

And this is the source of another issue for many organisations. We don’t have time to devote separate sessions to generating and then evaluating ideas. We need to fix problems quickly.

This is where the Six Thinking Hats method, made popular by Edward de Bono, offers a solution. By combining the approaches, we apply creative thinking techniques under the Green Hat to generate ideas, before using a sequence of hats to evaluate those ideas. We can then select the idea(s) that we feel most appropriate, given our understanding of both the issue and the organisation.

Adopting a Six Thinking Hats approach to Brainstorming is a great way of generating ideas and quickly evaluating them in a single session. And we can do it without impacting on group creativity or on willingness to participate.

This month, we have released two videos to our YouTube channel:

An introduction to Brainstorming techniques

This short video provides the missing ‘tell’ for those that haven’t heard it. We outline the four principles and benefits of Osborn’s Brainstorming approach.  We provide a summary of the different variations on the technique. Finally, we talk about some of the potential issues. 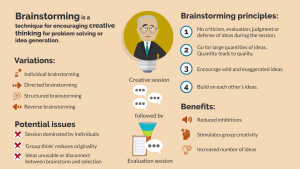 In our second video, we run through a potential sequence of Six Thinking Hats to Brainstorm a problem. The example includes tips on how to facilitate a session, using the example of a two-hours problem solving workshop. 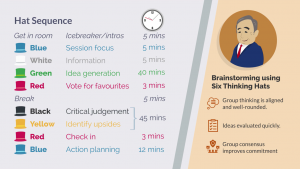 We hope that you find them both interesting and useful. Let us know what you think in the comments.

Postscript: A defence of the word Brainstorm

At the time of the ‘controversy’ surrounding the term Brainstorm, The Epilepsy Society spoke in defence of the word. They conducted a survey that found 93% of respondents did not find the term derogatory or offensive in any way. Rather they “felt that this sort of political correctness singled out people with epilepsy as being easily offended.” As soon as this changes, so too will my use of the word.

You are probably more likely to cause offense by saying “people suffering from epilepsy”; the preferred term is “person with epilepsy”.

If you would like to learn more about the condition, or make a donation to support their work, please visit the Epilepsy Society website.